John Lawton and his time as vocalist with Uriah Heep 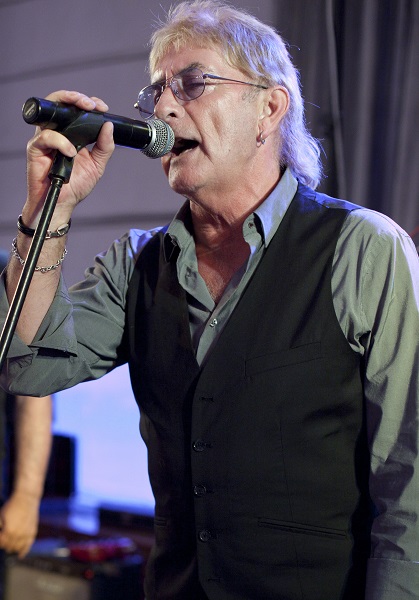 In this issue of MAS you can find the seventh chapter of our Uriah Heep-review-series: the review to Fallen Angel. So we have come to the end of the era John Lawton was the second vocalist with Uriah Heep. Norbert had contacted him to talk with him about his years with the band.

You can read this interview in german translation too.

MAS: Hi John!
The Music press gave no special interest to the 50th anniversary of Uriah Heep. While even single records of Sabbath, Purple or Zeppelin were celebrated to their anniversaries 50 years after the debut of Heep there are only short news about the death of Ken and Lee or short reviews of the 50-Year-Box-Set.

musikansich.de has put the Heep-anniversary into the focus. In June - the month of the 50th anniversary of the debut - we had interviewed Ken (Hensley (Keys); NvF) and Mick (Box (Git); NvF). Afterwards we have started a review series, to review all the Heep-records that haven’t been reviewed at musikansich.de yet.
Now we have reached the Lawton-years (`Fallen Angel´ will be in our January issue together with this interview) and we wanna learn a few things from you.

MAS: I am following Uriah Heep for a very long time now. (My first concert was january 1978 on the `Innocent Victim´-Tour). But I never heard anything about the reasons and the way you came to be part of the band. Have there been any connections before you joined the band?

John Lawton: No none at all, it seems they heard a “cassette” of Lucifer’s Friend and a clip of me singing at the Butterfly Ball. I got a call from Ken Hensley asking me to come to London to do an audition for the band. I went out and bought The Best of album, learnt a few tracks and the rest is history.

MAS: Your time with Uriah Heep frequently is characterized as the Pop-Years of Heep. Thinking of „Free me“ and parts of `Fallen Angel´ I would agree; concerning `Firefly´ neither. How do you see that?

John Lawton: Firefly was already written and just needed the vocals which were originally intended for David Byron so there was no way of changing that.
I had never thought of myself as a “Pop singer” but of course when Ken introduced „Free me” to the production of Innocent Victim it was going to be difficult to sing it any other way. Regarding Fallen Angel, I think Ken liked the idea of ”hit singles” after „Free me” became such a big hit in Europe, that he tried to come up with new tracks that were commercial and in many respects it worked ... was it a good idea? some would say yes and I think it opened up other record buying markets.

MAS: In 2016 BMG had started a Re-Release-Edition of 17 Uriah Heep-Studio-records as 2-CD-Sets. (It was cancelled – why ever – after the release of `The Magician’s Birthday´.) It was introduced by the 2-CD-Set `Your Turn to remember´. In the liner notes the time with you got no more than a short comment. Your name wasn’t even mentioned in the booklet. Ken Hensley said: „Heep were not at their best form“. Is this time underestimated?

John Lawton: Again it depends on which way you look at it, the band had just come off a USA tour when I joined and the comments from the press regarding that tour were not exactly positive...
I think my time in the band got them places (especially TV work) that they had not had before. It was I think down to the songs that were being recorded plus the time was right for a bit of a change of style ....underestimated ?... maybe.

MAS: When I spoke with Ken in an earlier interview about this topic he said: „In the glory days, I would bring a song to the band and the band would just take it and make it a Heep song. My songs are often more poppy so the band´s amazing rock influence took the songs away from that. After David, this was not happening and no-one else was writing anything so, with the chemistry that David and Gary (Gary Thain, bass, 1972-1975; NvF) had been a big part of, the band wandered off into a generally unidentified direction.” You have been part of this “unidentified direction”. What about the fact that there has been a cooperation in the Hensley Lawton Band later on?

John Lawton: What can I say, I brought quite a few “rock songs” to the table especially to Innocent Victim but unfortunately „Free ‘n easy” was the only one used and that was only because Mick Box wanted to put his name to it. Ken seemed to feel that he was the only one capable of writing a decent rock song. If anyone was responsible for an “unidentified direction ”Ken was mostly to blame. I remember Trevor Bolder (Bass; NvF) and Lee (Kerslake, Drums: NvF) coming up with some good songs....

Regarding Hensley/Lawton band, it came about after I invited Ken to the Uriah Heep Convention 2000 in London. For years Ken and I never spoke but the organisers of HV2000 of which I was one, asked me if I would contact Ken and invite him to take part. We put together the band for the evening which was myself, Ken, Paul Newton (Bass on the first two Heep records; NvF) and a couple of members of my band Gunhill. It was recorded and turned into a CD called
The Return. We were then persuaded to take the band on the road which we did and for a while it worked but then the underlying animosity of the early years began to resurface and Ken not wanting to listen to any song ideas I might have, we decided not to carry on .... shame and I do not like to talk about it especially as Ken is no longer around .... but we had some great gigs.

MAS: Do you see a break between `Firefly´ on one side and `Innocent Victim´ and `Fallen Angel´ on the other side?

John Lawton: Only because Firefly had already been recorded so I had no input

MAS: Did you had more influence to the music of the two later records than to `Firefly´?

John Lawton: Yes because I was the singer when we rehearsed the tracks before they were recorded plus I was able to try and contribute new songs and of course decide the keys of the songs.

MAS: Please name the three strongest songs you have recorded with Heep!

MAS: The singles from `Innocent Victim´ and `Fallen Angel´ have been quite successful. Why did you leave the band afterwards?

John Lawton: For the simple reason that the musical direction the band were heading was not the band that I joined, the songs were getting more and more commercial and the animosity between Ken and myself was becoming more and more and I was not enjoying the band life away from the live gigs...

MAS: Uriah Heep may be the greatest band you have been involved in. But besides there are your participation in Les Humphries and Lucifer’s Friends. How important is the time with Uriah Heep in comparison to the other bands?

John Lawton: Yes of course Heep was the biggest band, but I would not say the greatest. They were fine musicians but I have worked with some exceptional musicians over the years. I got to see a lot of the world with Uriah Heep and I learned a lot from recording with them but working with the Les Humphries Singers and Lucifer’s Friend taught me different things and in this business, you never stop learning....

MAS: Thank you for the time answering our questions