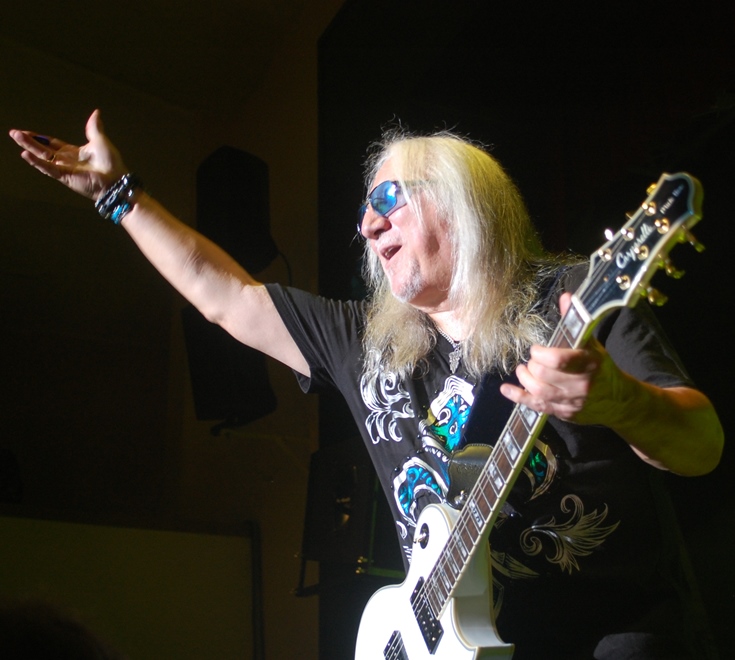 When Norbert gave non-used concert tickets he had found after the concert in the Niedersachsenhalle in Hannover at the backstage exit to Mick, Ken, John, Lee und Trevor for autographs one week ahead of his 15th birthday he had not the slightest idea that he would do an interview with the only foundation member still being in the band 42(!) years later because of the 50th anniversary of the band.

After all Uriah Heep had not only been a legend and institution than, but a band that had in the eye of a lot if critics and fans – at least since the leaving of foundation singer David Byron – passed it's zenith for quite a while.
Who would have bet in these days that Uriah Heep would make it on more than 40 years - not to mention the creative Up oft he last 12 years.

June 1970 which because of the release of the Uriah Heep debut is looked upon as the foundation date now dates back exactly 50 years. MAS takes that as a cause for a thoroughly look on one of the foundation fathers of Hard Rock. In this issue we have interviews with the foundation members Mick Box and Ken Hensley (being a member of the band until 1980).

Beginning in the next month we will have month by month reviews to all the Heep records which haven’t been reviewed in musikansich.de yet.
Maybe there will be one or more interviews in this time.

You can read the interview with Mick Box in german translation too.

MAS: Hi Mick! June 1970 `Very ‘eavy, very ‘umble´ was released. So, this year is the 50th anniversary of Uriah Heep. I’m a fan since 1976. So, I heard and read a lot of things about the band in the last nearly 45 years. I want to seize the chance of the anniversary to verify the truth of a few legends I heard.

The first thing I heard. A band called Spice entered the Lansdowne Studios (near Holland Park in London; NvF) to record just a few demos. Then one day Gerry Bron entered the studio with a record contract in the hand and surprised the band by the announcement: „We won’t record demos. Here’s the contract for your first album.” Truth?

Mick Box: We were playing a club in High Wycombe in the UK called the Blues Loft as a band called Spice Our Bass player Paul Newton’s Dad managed us, however he felt he could take us no further and invited Gerry Bron who looked after Manfred Mann, Gene Pitney and others at the time to come down and see the band. This band was the Spice four piece. (Mick Box, David Byron, Paul Newton & Alex Napier) He loved what he saw and heard, especially as we were playing mostly original songs. He said he would take us into the studio and see if there was a future to be had. He liked what he heard coming back through the speakers and we started recording the first album there and then.

MAS: What was the exact time of these Studio sessions?

MAS: Ken had joined the band shortly before and it was quite obvious that this would have a deep impact to the sound of the band. So, the decision was made to change the name to Uriah Heep. Truth?

Mick Box: We were a four-piece band and we had most of the songs written but on hearing them back we felt a keyboard could give us the musical colour we were looking for. We tried out one of Bron’s friends a school teacher called Colin Wood on keyboards, and it was evident that this was the way to go. I was a big fan at the time of a band from the USA called Vanilla Fudge, and they used a Hammond organ played by Mark Stein which I loved, as the Hammond Organ fit in every nuance of our music. Paul suggested a guy called Ken Hensley who he had worked with in a band called The Gods, and played Hammond Organ. Ken came to the studio and loved both the songs and the set up Bron had with Management, Publishing, Recording and live work through his Booking Agency, so we became a five piece and the jigsaw puzzle was complete.

MAS: Why Uriah Heep? Who had the idea? The character created by Charles Dickens is nothing less than likeable or positive. Just the provocative attitude of a rock band? This negative character of Dickens’ Uriah Heep doesn’t fit so much to the often romantic, fantastic and peaceful lyrics of Heep. Would you agree?

Mick Box: It is just a name and to draw those conclusions is not a road I would go down. I do not think the band’s name has to reflect the music they play. Uriah Heep is just one of the characters from a literary giant like Charles Dickens that he used in his book David Copperfield, and that was good enough for me. Gerry Bron our then Manager suggested the name.

MAS: Would you agree with the moment of the release of Very ‘eavy as the birthday of Heep? Or is there another moment better fitting?

Mick Box: We decided that moving from a four piece to a five piece, and the change of the musical template, it felt like we should have a change of name, and on the release of the first album in 1970 that really was the birth of the band to the rest of the world.

MAS: There are no credits to Ken on ‘Very ‘eavy’. How strong was his influence on the album?

Mick Box: When Ken came on board a lot of the writing was already done, and he was effectively joining the band, and it was at a stage where he was finding himself and integrating with the rest of us. Whatever his influence as you say was in that regard, was settled between Gerry Bron and his good self. I had no part in it at all, and neither did the other guys.

MAS: Then a deep cut. On `Salisbury´ he is writer or co-writer on all songs. The half of the songs is credited to him alone. Is the difference really that large?

Mick Box: Once Ken had established himself in the band he quickly flourished as a song writer and there was also a creative chemistry in writing songs back then between David, Ken and myself. We tried to in the early days of our recording career always use the best songs on the table no matter who had written them, and it seemed that Ken as a writer had at last found an outlet for his writing ability that he had never had before. The band was so strong creatively, you could bring in the barest of bones of a song and we would make something special out of it, and many times we did just that.

MAS: What about his activities with the band as long as it was called Spice? Did he tour or record a longer time with them before the change of the name?

Mick Box: He only ever heard the Spice recordings when he became a part of that in the studio, then we changed the name.

MAS: Today – no question – you are Mr. Uriah Heep. In the 70ies the talk about Heep spoke about two “creative directors” – Ken and Dave Byron. Truth? How strong was your influence in these days?

Mick Box: I let people think what they want to think to be honest. I am a confident person, so I have no issues with what I brought to the table musically or otherwise, and I continue to do so, to this day.

MAS: Our last interview in November 2016 was about the re-release series started in that fall. The series didn’t go on after `Magician’s Birthday´ was published anew. Why did it stop and is there any outlook for an ongoing release?

Mick Box: BMG have done many re-releases and they are presently putting together a 50th Anniversary Box Set, which will be great.

MAS: Well, Mick, our little magazine will celebrate the anniversary of Heep by the largest project in the 20-year-history of musikansich.de. After interviews with you and Ken in this June issue we will do reviews to all (12) Heep albums that hasn’t been reviewed in musikansich.de yet in a monthly rhythm. So, for more than one year there will be no issue without Uriah Heep.

Mick Box: That is nice to know and thanks for your support.

I didn’t hear anything about special activities to the anniversary by the band itself (besides a 6-gig-UK-tour – which seems to me not more than your daily work). Will you let this great moment of time simply let pass by?

Mick Box: Of course, we would never let a milestone like that pass by, and the plans we did have in place have disappeared with the emergence of Covid-19.

MAS: I used to claim for Heep that the band is the only one of the foundation fathers of Hard Rock (Heep, Purple, Zeppelin, Sabbath) that has never called it a day. Truth? What about the time between `Conquest´ and `Abominog´?

Mick Box: After the Conquest line-up was disbanded there was only one weekend (2 days) before I had pieced back together the start of the Abominog line-up!

MAS: Mick, I thank you for the answers and I may be coming back with some questions while we are doing our review series.