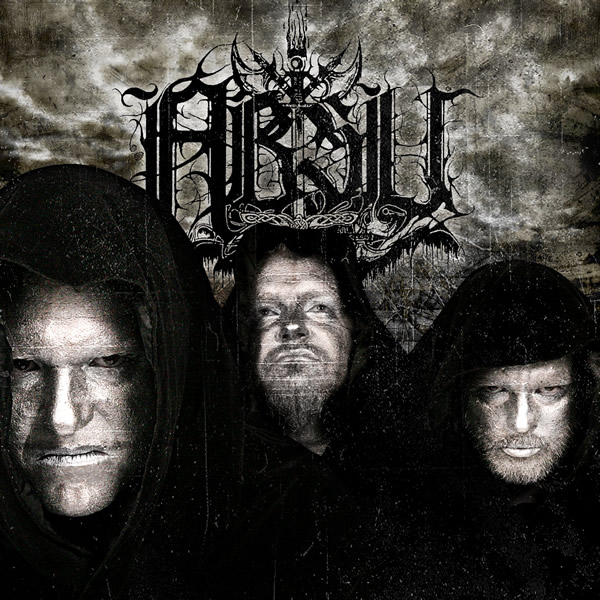 "Between the Absu of Eridu & Erech":
Erech, also known as the Sumerian Uruk, is an ancient Mesopotamian city located northwest of Ur in today’s southeastern Iraq. According to legend, it was built by Gilgamesh. Within the walls, excavations traced successive cities that date from the prehistoric Ubaid period, perhaps before 5000 BC, down to Parthian times. (126 BC-AD 224) Eredu, one of the oldest cultural seats in ancient Babylonia, is located a few miles south/southwest of Ur and mentioned in ancient records as the city of the deep. In it was a temple of Ea, god of the sea and of wisdom. Comprehensively speaking, the abyss lies directly between these two regions and the story line of the song describes how the Absu hastily turned into a bottomless gulf, yet unfathomable infernal pit underneath the ocean floor. There is an "Absu-Temple", which is located in Eridu as well as an "Absu-Gate" being in Erech. This too was a meeting place for the gods and goddesses of the netherworld, more or less.

"Night Fire Canonization":
This song was profoundly inspired by a combination of theorists, such as Empedocles, (Fifth Century BC) Jacob Boehme (16th Century) and Kenneth Grant. (The Merovingian Mythos) The spirit, or Night Fire, reabsorbs all of the light that it has projected as an objective immortal spirit, the Sun at Midnight. The Dragon was separated into two beings, the male, who is the Howler in the Wastes of Nothingness, the Demon Lord of Time, and the female, who presides over all of the created Multiverse. (The prototype of manifestation) The explosive union of these two opens the gates of the Abyss. Then, the serpent fire rises to an explosion of ecstasy in the Abyss, vibrating its word and casting forth its star. The serpent fire interlaces itself with the water of space, and by this process the true Beast, the male aspect of the Dragon, opens the womb of the night, as his infinite light breaks open and causes her to appear as infinite darkness. This process is the means of the return to the supreme state represented by the Cosmos and is the true formula of Illumination. (Night Fire) When the urge to know is turned inwards instead of outwards, as it usually is, then the ego dies and the objective universe is dissolved. In the light of the illumination, the night fire, the Gnosis, is all that remains. Does that make sense? I didn’t think so. Let’s move forward, shall we?

"Nunbarshegunu":
Nunbarshegunu is the mother of Ninlil as well as the old woman of Nippur. She convinces her daughter to marry Enlil to enchant him, so she can have full control of the underworld. Enlil raped Ninlil, gave birth to Sin (the moon god) and was finally banished from the underworld. Once this occurred, balance was finally restored between Kurnugi (underworld) and the cosmos.

"13 Globes":
13 Globes is a short story narrated by "Zagan" who is the 2nd spirit of Yog-Sothoth from the supplementary material of the Necronomicon: To Conjure Ye Globes. Instead of traditionally discussing each globe (spirit) and the powers each one possesses, I have decided to utilize numerological focus on four out of the 13 globes. (Primarily for astrological reasons)
I, in 1st person tense, represent the globe "Zagan". My globe has shifted trajectory (course) and now am stuck between the 6th and 7th globe, which are "Vual" and "Scor". The only other globe out of the 13 that can guide me back to my original position is the 5th globe: "Durson". This globe can reveal all paranormal secrets and tell of past/ancient times to help me (Zagan) return to my proper locality.

"Of the Dead who never rest in their Tombs are Attendance of Familiar Spirits":
Written in three movements, this song is a conceptual piece influenced by the supplementary material of the Necronomicon: Of Diverse Signs. The Elder Ones have blackened, yet tarnished the Earth with their curse for the dead to become immortal. The Elder Ones remind the dead of the four signs that can protect them; however, the dead must be extremely cautious because they must exploit them properly to banish menace and antagonism at the same time. NOTE: Voor is the first of the four diverse signs and is the "true" symbol of the Elder Ones.

"Magic(k) Square Cipher":
This song represents the Seal of Saturn (Loshu) and its ruling Sephirah. (Binah) The magic(k) square of Saturn is a numerological table from one through nine, arranged in such a way that all rows add to 15. (1+5=6) This Kabbalisticly exemplifies the forces of containment, definition, limit, time, death and stagnation in ritual magic(k). Saturn (Binah) takes position of Daath at the apex, being the first Sephirah to manifest in the Macrocosm. Also, in numerological terms, the number 15 (1+5=6) or 6 represents Wands, Cups, Disks and Swords in the tenet of Thoth. The number 6 is the broken down into 4 Sephira’s of all the sixes, which are mentioned above.

"In the Name of Auebothiabathabaithobeuee":
This song is my interpretation of the Lord of Spirits and the incantation of Yebsu.

"Girra´s Temple":
Girra, (also known as Gibil or Gerra) is the Sumerian god of Fire and was the son of Anu and the goddess Shala, Ishkur's wife. He provided humans with the means for making food more edible, by cooking it with fire. He also provided for the building of cities by hardening bricks of clay used for construction until they were hard as stone. Girra’s only known temple was the E-melamhush, 'House of Awful Radiance,' which was at Nippur. In my song, Girra was a fire god who had the ability to ignite himself or any object within sight, as he represented fire in its beneficial respects. I picture Girra sporting circlets of burnished copper around his hair and arms, and dressed in a belted leather kilt and leather sandals. When Girra self ignited, his body started smoking. As the process continued, he gave off increasing amounts of smoke from his shoulders until he flared and burst into flames, like a torch. When returning to normal state, the flames would die down and gradually disappear, leaving Girra’s body hot and smoldering afterwards.

"Those of the Void will Re-Enter":
Those of the void Will Re-Enter refers to servants, people of the arcane order, as the void represents the Annunaki in Sumerian mythology. The Annunaki were seven judges of the underworld and children of Anu who also sat before the throne of Ereshkigal. (Wife of Nergal) These “fates” waited at the gates of the underworld to judge newly-arrived souls. So, once the people enter the under worldly realm, they forget where they came from and their overall origins. They are reminded by the Annunaki that they were created from the blood (mixed with clay) of the minor god Geshtu-e. (Sumerian god of intelligence) Legend has it that he was slaughtered by the Annunaki and his mixture of blood and clay was used in the creation of mankind.

"Sceptre Command":
Tense = 1st person; "I" Nergal, 2nd person; "You" Namtar & Mars (Gugalanna) and 3rd person-narrator
Nergal is one of the chief deities in Gudua/Kuta. He loans Namtar (evil god, negative aspect of fact & disease bringer) his scepter to cast a spell to control the First Order in Gudua/Kata. In order to regulate atypical under-worldly chaos, Nergal calls upon Mars’ (Gugalanna) assistance to help with the spell. The incantation cannot be projected properly without the essence, yet illumination of Mars’ light shining directly in the "scepter of command". With Nergal’s telekinesis into Namtar’s borrowed scepter and the rays shining from Mars, this creates a successful spell of triangular effect.
Conclusion: Nergal, Namtar and Mars successfully contain complete control of the chaos in Gudua/Kuta. The origin of elements (1, 2, & 3 - from the fifty gates of Intelligence) were trying to seep north past the surface of the earth; however, the spell was projected as the First Matter (abyss) was contained.

"Ye Uttuku Spells":
This song represents a demon’s spells in the beliefs and mythology of the Assyrians and Sumerians. There were two types of Uttuku: the souls of the dead that could not rest until they could be appeased and the truly evil spirits, which were said to emanate from the bile of Ea. Uttuku also manifest in horrifying images of men with animal heads, claws and horns. They dwelled in holes in rocks, caverns, and lonely ruins. These spirits brought disease, criminal thoughts, acts and disaster upon any human with whom they came in contact.
Exotic terms used within the lyrics: Ginyaatlie: Flood; Tedloonetaa: Shadow; Kukhwa: Star

"Twix Yesterday, the Day & the Morrow":
This instrumental piece is actually the epilogue to "In The Name Of Auebothiabathabaithobeuee"...