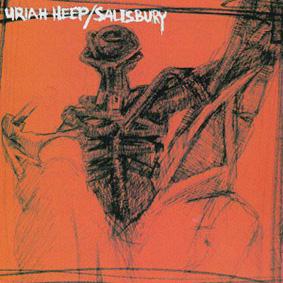 Tapio Minkkinen Uriah Heep specialist from Finland who takes care for the official Uriah Heep Discography has assembled all the most important information about the second release of the band on the occasion of its 50th anniversary. And he was so kind to cede it to us for publication.

You can read this article in german translation too.


Uriah Heep's second studio album Salisbury was released in the UK 50 years ago on 12th February 1971 (release dates in other countries may be different).

On this album Ken Hensley took his position as main songwriter and musical leader. Of the eight songs released so far from the album sessions he wrote five and the rest three were co-written with other band members. He also sang lead vocals on two songs: „Lady In Black“ & „High Priestess“.

Of the songs the best known is without a doubt „Lady In Black“ which surprisingly became a hit for the band in 1977 - six years after original release and is today one of their most popular and best known songs. The title track is a very special as it's over 16 minutes long orchestrated piece with brass and woodwind instruments.
„Bird Of Prey" is another well know song because together with „Lady In Black“ those are the only ones that have been included in the live set regularily.

I have always seen this as merely a bunch of songs put together and not a real album. I don't mean it as a negative thing but it's just an observation because all the songs are very different from each other and could well all be by different bands. I guess this was a time of experimentation for the band that was still searching for their direction.

In North America the album was released with a different cover because the theme with tank on cover wasn't the best possible subject at the time in America that was going through war in Vietnam. Also track listing was slightly different – „Simon The Bullet Freak“ (in germany released 1976 as single b-side of „Lady in Black“; The Editor) replaced „Bird Of Prey“ because an earlier version of the song had been included already on North American versions of the 1st album.

Latest remastered vinyl release was in October 2015 (BMG/Sanctuary BMGRM085LP) and the latest remastered CD re-release was the expanded deluxe edition 15-track double CD in October 2016 (BMG/Sanctuary BMGCAT2CD56). There's also a new 2020 "Expanded Version" released only digitally in streaming platforms and as downloads that includes all 15 tracks that were on the double CD release plus 7 additional different, alternate or edited versions taken from previous releases.